It has been our endeavour to marry technology and consumer insights for the media & entertainment industry in India, and our recent product launch, Ormax Xpressive, powered by RealEyes, is a significant step in this direction.

Unlike conventional content research that relies on asking consumers a set of questions (using questionnaires or focus groups), Ormax Xpressive uses automated facial coding technology provided by the Europe-based firm RealEyes, to convert the consumer’s actual behaviour while watching the content, as captured through their facial expressions, into emotions. So, now we can actually know which specific shots in an ad or an episode or a scene triggered which emotions.

To demonstrate the product to the media & entertainment industry, we conducted a live test with senior industry professionals at our sixth anniversary party on June 25, 2014. The theatrical trailer of Salman Khan-starrer Kick was used as the test content. Here’s a snapshot of the results:

In the video below, you see how the “Engagement” with the trailer changes second-by-second, as the trailer plays out. Key an eye on the trailer on the left, and the movement in the graph on the right. Engagement is defined as the presence of any of the six basic emotions (happiness, sadness, scare, confusion, surprise, disgust) on the face of the viewer. Watch in HD resolution if your connection permits you to.

The image below captures the results in a static form, where the highs and lows in engagement are interpreted based on the content of the trailer: 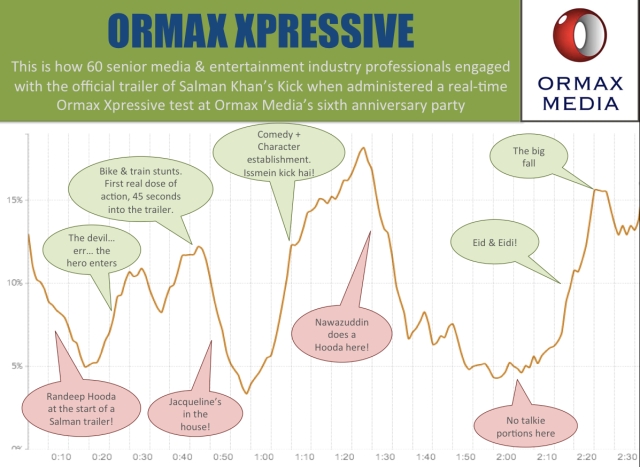 Many of you have reservations about people saying one thing in research and doing another. Here, what they do is what you see. There is no “saying” involved.

For more on Ormax Xpressive, and to download the product deck, visit here.