Housefull 2: A Campaign That Fell Short

This post is about how Housefull 2 could have benefited from a better planned campaign and opened far higher than the level at which it has actually opened. It is not about the film itself. In fact, I haven’t watched the film yet!

Diwali 2010. Golmaal 3 (G3) released to thundering box office response, scoring Rs. 34.75cr on the opening weekend at the box office. G3 had another film with a bigger starcast (Action Replayy) cutting into about 35% of its screen space. Also, Diwali (Friday in this case) affects that day’s collections by about 30%, because of Laxmi Puja. If it was a clean holiday weekend with no competition, G3 would have scored Rs. 43cr, if not a couple more.

That’s where the puzzle begins. If a franchise comedy with only one big star and no chartbuster song can cross Rs. 50cr on its opening weekend, why can’t another franchise comedy (Housefull 2) with one and a half big stars (no, not of the critics variety!) and three songs in the top 10, achieve the same? In fact, from what it seems, HF2 may fall staggeringly short, and finish at around Rs. 40cr. Surely, it must be a case of an opportunity lost? Indeed.

Let’s look at some data from Cinematix to understand what went wrong. The chart below captures the Buzz (%) for G3 and HF2, from seven weeks before release (Wk -7) to the week of release (Wk 0). 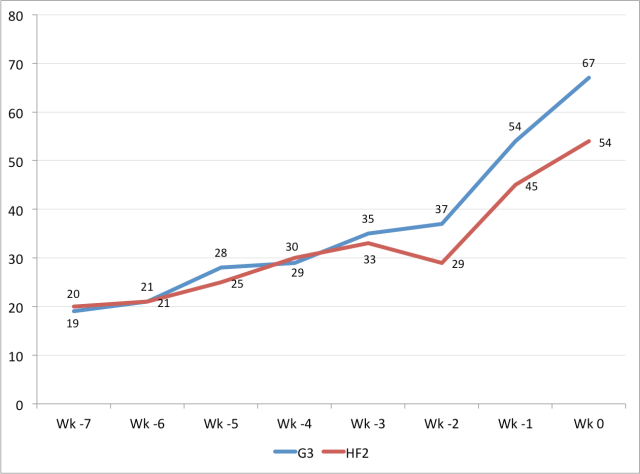 As you can see, the campaigns were tracking equally well on Buzz till Wk -3. One can argue that HF2 should have tracked well from Wk -7 itself, given Akshay’s fan base and the pre-cursor campaign in last year’s Cricket World Cup (you remember?). But that’s a point of digression.

Wk -2 onwards, the HF2 campaign clearly ran out of steam. What G3 showed in its last two week is “normal” Buzz growth most big releases show. However, HF2 just couldn’t grow at the normal pace. There was no apparent effort to create the Buzz. The stars were not present on any reality shows. There was no controversy brewing in the papers and on the news channels. It almost seemed that the makers were over-confident that the strength of the franchise will see them through. In fact, the director of the film was more visible than the stars themselves! Our Director’s Equity Survey (DES) results show that he should have stayed away from the campaign as far as possible.

Next, let’s look at Interest (i.e. Intention to Watch). This represents % theatre audience who said they will definitely watch the film in a theatre when it releases.

G3 was always ahead of HF2, even at the start of the campaign, indicating that Golmaal is a bigger franchise than Housefull. Having said that, the HF2 campaign no growth in Interest at all. In fact, the Wk 0 score is lower than the Wk -6 score.

The reasons were embarrassingly apparent to us. It was a comedy film but none of the promos were funny. The whole campaign hinged on Anarkali Disco Chali and Papa Toh Band Bajaaye. Only about 2-3 dialogue clips were used. There was no sampling of actual humor from the film. In fact, the Wk -4 low of 48 came after Papa Toh Band Bajaaye promos were fatiguing out, and the funny promos had not started at all.

Now some of you who have not liked the film will argue that there is no humor in it that’s “promo worthy”. Without watching the film, I can contest that thought. Because when you don’t have strong enough comic lines, you should handle the quality problem with quantity. Put 10-12 dialogue promos out and everyone will find the 2-3 that they like. That’s what the theatrical of Kya Super Kool Hain Hum attempts to do. That’s what Rohit Shetty has always done with the Golmaal films, and will surely repeat with Bol Bachchan.

Comedy is the most popular genre in India. It is the rare genre that has the ability to draw families to the theatres. But not when you choose to hide all the humor. An inexplicable error of judgment.

What happens to the film Monday onwards is another point of analysis altogether. But the fact is: Housefull 2 should have crossed 50cr on its opening weekend. And a poorly executed marketing plan has stripped the film of 20-25% of its opening weekend potential. A lesson for other big comedies lined up this year!

8 Responses to Housefull 2: A Campaign That Fell Short