Note: The analysis in this post is based on data that has been estimated using a variety of techniques. Some of these estimates are also based on qualitative research. Such estimates are valid in context of the non-statistical purpose of this post. Also, all revenue figures mentioned in post are from the domestic box office only.

The film released on a national holiday and broke the record for the highest opening day ever at the box office. Its Day 2 doesn’t even feature in the top 10 second days. Under normal circumstances, a film would drop about 25-30% from a Day 1 holiday to a Day 2 non-holiday. However, Agneepath dropped a staggering 50%.

The most common explanation doing the rounds is that the film is poor on Word of Mouth (WOM). But there is enough evidence from our past work to prove that this explanation is fallacious. Agneepath WOM is definitely higher than Ra.One’s, which sustained for at least three days before showing any unusual drop. No matter how positive or negative, WOM begins to kick in only from Day 3 & 4 onwards, and certainly not from Day 2.

I’m not suggesting that Agneepath has good WOM. Our preliminary data suggests it is somewhat mixed. However, regardless of how high or low the WOM is, Day 2 can’t be explained by it.

What else, then, explains the unprecedented fall the film encountered? To understand this, we need to look at our film audiences in a somewhat technical, mathematical way.

The chart below captures the different kind of audiences a “big” film gets. If 100 people visit the theatres to watch a particular film, some will be repeat visitors, who watch the film again because they liked it the first time. Sometimes, they watch it more than twice. Once we remove the repeat visits, we are left with the unique visits.

These unique visits come from two kind of audiences – Regulars and Irregulars. Regulars are those who visit the theatre at least four times a year. Many of them are diehards, and visit the theatre more than 15 times a year. But most Regulars watch 4-8 film a year in theatres. To film fans, these numbers may come across as absurdly low. Only 8 films in a year, you may wonder. But then, real life has its own facts!

Irregulars are those who watch only 1-3 films in a theatre in the entire year. What kind of people are these, you may ask. These are people who essentially watch films on the small screen. They need to be really motivated to visit a theatre. They would do that only when someone in their family forces or convinces them to come along. A very common example will be a child forcing his parents to watch Ra.One with him, or a youngster taking his parents to watch 3 Idiots, after he watched it with his friends and realized it is a film his parents will enjoy too. 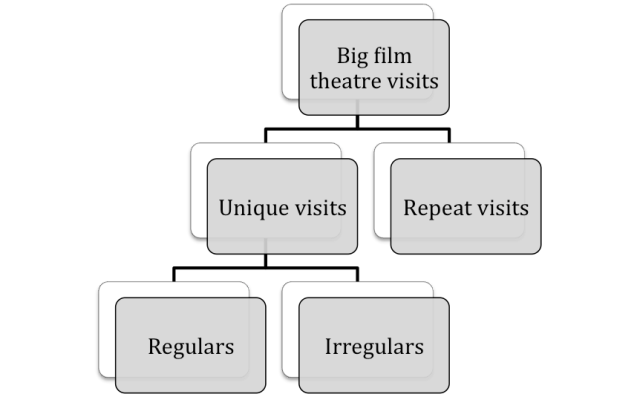 The table below captures data for four big films from the recent past. The total theatre visits (gross revenue divided by average ticket price) have been first divided into unique and repeats. The unique visits have then been divided into Regulars and Irregulars. The last row estimates the % Irregulars for each film, i.e., out of all the people who watched the film in a theatre (unique visits), how many were Irregulars.

The last row tells its own story. For a film to maximize its potential, it needs to recruit Irregulars. Upto 25-35% of the unique visits of these films came from Irregulars. Why would Irregulars be convinced to watch these four films?

1. 3 Idiots because of the immensely positive WOM and the high pre-release buzz.

2. Bodyguard because of Salman Khan’s superstardom.

3. Ra.One because of an extraordinary marketing blitzkrieg and the festive Diwali timing.

4. ZNMD because of very strong WOM in the corporate and upper-class youth segments.

Now imagine a situation where a big film does not get a significant percentage of Irregulars. What would tend to happen? It will have to rely purely on the Regulars. As a result, it will lose about 25-30% of its potential revenue. Also, the film will tend to have a disproportionately good first day, as the first day crowd is essentially of the Regulars. What we call in common parlance, the ‘first day first show crowd.’

Yes, you know what I’m getting at. Agneepath, with all its marketing buzz and hype, does not seem to have managed to recruit Irregulars in high numbers. As a result, its Day 2 shows a huge drop. Also, the film will tend to dry up faster than most films of its scale and similar WOM. The Irregulars ratio for the film is likely to be less than 10%.

Why could Agneepath not manage to recruit the Irregulars? Five key reasons:

1. Hrithik Roshan is one of the biggest star in India. But he is not as big as Salman Khan, who can recruit Irregular audiences purely on his star power.

2. The Irregular audience base is heavily family skewed. It is also female skewed. Both these segments – family & females – don’t prefer the genre to which Agneepath belongs – Action.

3. The Agneepath campaign was content focused, but did not have an element of controversy or sensationalism that could get the Irregulars interested. Even The Dirty Picture would have got more than 20% Irregulars, because of the hype around its bold theme.

4. The campaign and the PR did not position the film as an “event film”. The promos were fairly appetizing, which is enough for many Regulars. But the campaign did not underline the “must watch” element in the film, that would get the Irregulars to the theatre.

5. While the film is a remake, the original itself is not a very popular film today. It doesn’t have the enduring charm of films like Deewaar, Amar Akbar Anthony, Don, Satte Pe Satta and Hum, just to name a few. The hype around the remake itself was force-created by the media. In a dipstick conducted by us in the week before the new Agneepath released, as high as 31% Regulars had not even seen the original. You can imagine that the number would be much higher, probably even double, among the Irregulars.

Yes, the Agneepath campaign had enough meat in the form of the starcast, an ace producer, a hit item song and media visibility. Unfortunately, none of these are drivers for the Irregulars.

Next time if you are working on a “big” film’s marketing, remember to address the Irregulars as well. They can make upto 25-30% difference to your revenues!

Agneepath will still cross Rs. 100cr nett at the box office over its lifetime. It may even end up doing substantially more than that. Now only if it had the Irregulars on its side too (at least a few more of them), we could have been talking 150 cr for exactly the same content.

Conclusion: Bollywood producers may have got marketing savvy, but the marketing textbook still has some surprises to throw back at them.

16 Responses to Agneepath: The Missing Trick